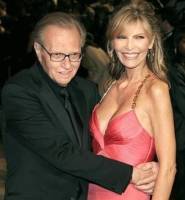 During an appearance on Thursday, famous interviewer Larry King was the one answering questions about wife Shawn King's alleged extramarital affair.

King and his wife of 19 years were filming a segment with Hallmark Channel's 'Home & Family' when hosts Mark Steines and Debbie Matenopoulos asked them about the tabloid rumors.

"Interviewed people involved with rumors. Rumors are what they are — they're rumors. And I tell you the truth, I don't pay any attention to them."

Shawn, who is King's eighth wife, added: "Last week, there was a rumor going around about Larry and a speech he made in Kiev. This week, I’m the latest pinup girl."

"You just have to develop a shell around yourself and not get hard on the inside, and stick together."

Later on the show, after talking about housekeeping, the pair was invited to try out a bed they helped make.

"All those rumors, we're gonna put them to rest right now!," laughed Shawn King as they put their arms around each other.