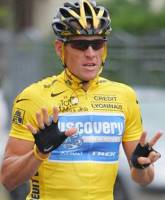 In its piece, Armstrong's former teammate, Tyler Hamilton, said the cyclist and other team leaders encouraged doping in an effort to win the Tour de France.

"I feel bad that I had to go here and do this," said Hamilton, in his first public admission of doping throughout his career. "But I think at end of the day, like I said, long-term, the sport's going to be better for it."

"I saw EPO in his refrigerator. I saw him inject it more than one time like we all did, like I did many, many times."

"Training alone wasn't doing it and I think that's how…many of the other riders during that era felt, I mean, you kind of didn't have a choice."

"I know he's had a positive test before for EPO at the Tour of Switzerland in 2001."

"People took care of it. I don't know all the exact details but I know that Lance's people and the people from the other side, the governing body of the sport figured out a way to make it go away."

But Lance Armstrong's lawyer, Mark Fabiani, has slammed CBS for the report and says Armstrong pulled out of an interview to defend himself.

"CBS has an unpardonable zeal to smear. Throughout this entire process, CBS has demonstrated a serious lack of journalistic fairness and has elevated sensationalism over responsibility."

"Their reporting on this subject has been replete with broken promises, false assurances and selective reliance on witnesses upon whom no reputable journalist would rely."

"They have basically reneged on promises made and anyone would be frustrated by such treatment."

"This latest alleged revelation is no more reliable than CBS' earlier claims."