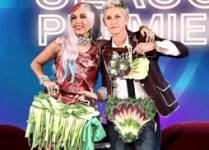 ) is getting a little tired of all the questions.

In an appearance with David Letterman on Monday night, after the host refused to believe that her meat dress being was turned into beef jerky and she once ate a Barbie doll head on stage, the singer took the host's notes and tore them up.

"I'm just so fed up with all of it," she said before putting the paper in her mouth and attempting to eat it.

"No, no, no, that's not what you think... it's chemically treated. You'll be sick for weeks," Letterman said. "You won't be out of the egg for a month."

Gaga eventually spit out the big ball of paper.