Kristen Bell Will Return On 'Heroes' 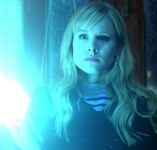 ) has confirmed that she will be returning to 'Heroes' in September as part of a new multiple episode arc.

Bell tells 'People' magazine she will reprise her role as electricity-zapping Elle, an agent of the Company, and is "just happy to be electrocuting people again!"

When last seen on the show, her character saved Mohinder, Molly and Maya from Sylar and although she couldn't capture the villain, the feeling of being a 'hero' did appear to change her so it's certainly possible we'll see her in more of a positive role in the third season.

'Heroes' returns to NBC on September 22, but the network has begun airing spots for the upcoming season. Check out the latest 'Choose a side' promo below: