Kristen Bell: Nothing For Me Like When Husband Dax Takes Shirt Off 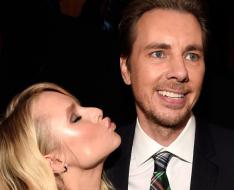 ) says she's still got the hots for husband Dax Shepard even after ten years together.

"I don't find the uniform not a turn on," Bell said at the Los Angeles premiere of CHiPs. "But I prefer him bare-chested."

"He's an upside-down triangle and there's nothing for me like when he takes his shirt off."

Shepard joked that his wife didn't even notice the uniform: "She could really care less. I would say it's probably the nine-and-a-half years. Maybe like year one if I wore it, she would've noticed. But, you know, you can only expect so much."