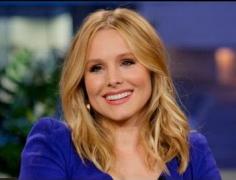 ) made her first late night appearance since becoming a mother.

The 'Veronica Mars' actress said she had been battling sleepless nights but not for the reason one would think.

"I am being tortured by a devil bird. Have you heard of these? Apparently they're called mockingbirds and it's their mating season," began Bell. "And I have a bachelor in my tree that starts squawking around midnight and wraps it up around 7 AM."

"And the baby sleeps. That's the irony here. The baby's sleeping but this bird! I have had numerous interactions with him and he did this to me last year. He's schizo. And I'm always yelling up at three 'No one wants to date you.'"

"He's trying to get a mate and, believe me, no one's coming within ten feet of this guy. I sometimes get up in the middle of the night and just go out and shake the branches of tree."

"I can't hurt him because unfortunately he's protected under the California Bird Migratory act. I've looked it up," she quipped. "There's legal ramifications."

"I got a Nerf gun last year to shoot soft pellets to try to get him to go away. The problem is this. It's not good bird sounds. He's a mockingbird so he does nasty sounds from the neighborhood and he's known on our block for doing car alarms... right outside my window."

"I can't sleep with ear plugs because I have to have the baby monitor. I'm screwed."

"But this year I bought a super soaker," Bell said of her latest attempt. "Because I need more range. When I open the door he hears the knob and he stops and he flies to a tree 10 feet away where I can't reach him."

"But I ordered this 35 foot super soaker. I think we're going to wrap this up this year. I really do."

Kristen Bell also joked about why she and Dax Shepard named their baby girl Lincoln.

"It was Dax's idea," explained Bell. "We thought she was a boy for a while. We had no proof. We just vibed boy and he always wanted his first born to be named Lincoln."

"So we got lazy when we found she was a girl. And said 'Hey, why not Lincoln?'"