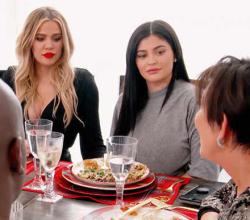 Kris Jenner is still shying away from confirming her daughters Kylie and Khloe are pregnant but she came as close as she has on Sunday's 'Keeping Up with the Kardashians'.

) and Kanye West are welcoming her third child via surrogate next year, Khloe reportedly expecting her first child with boyfriend Tristan Thompson and Kylie, 20, with boyfriend Travis Scott.

The family went around the table and talked about what they were most thankful for.

"I don’t know if I'm thankful for the calm before the storm next year with the new baby," said Kim. "And I'm thankful that we have family here!"

"I think I'm thankful for having so many different generations here," said Khloe. "I think it's so cool."

When it was Kylie's turn, she began: "I'm thankful for my mom, because I don't know what I would do without you. You're like, my favorite person on the planet. You really are. I hold you in high regard."

"I used to pray that one of you guys would have a baby," responded Kris. "And now it's like a faucet that we turned on and it won't turn off."

"So the fact that I have all these grandchildren, it's been the most amazing journey to watch your kids. It's truly the meaning of life."