Kim Kardashian: Swimsuit Selfie Was My 'Big Middle Finger To The World' 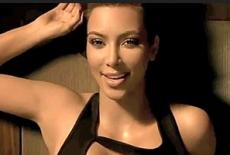 In an appearance on 'The Tonight Show', Kim Kardashian (photos

) told host Jay Leno that she wanted to share her swimsuit selfie as a figurative "f--k you" to the press.

"I was trying on clothes. I was trying on my bathing suit and I actually just sent that to my boyfriend, now my fiancee," she said, referring to Kanye West. "And I was 'Babe, can I post this up?' This is my big middle finger to the world on everyone that called me fat."

Kardashian also said that criticism for putting on the extra weight during her pregnancy "changed me a lot" and "really hurt my soul."

"It changed how I am in the public a little bit. It's like I would go out and there were photos of me anytime I was hungry or these stories where I was 200 pounds. I was gaining weight because I was pregnant and it was really hard to read all these stories and hear all these nasty things."

"People sometimes question like am I out in hiding now. No, I just wanted to adjust my life a little bit because why would I subject myself to so much negativity especially now that I have a daughter. I just don't need that energy and be in a happy place where I'm at home," she continued.

Kim also showed off the bling on her finger and said Kanye spent time designing the ring. She confirmed he's the one planning the wedding although she will get to pick the location.

"I think somewhere destinational. Someplace Parisian? I mean, who knows, I got pregnant when we were in Italy. Maybe Italy. But I want somewhere special. Maybe I'll pick the place and he can plan it."