Kim Kardashian Defends Not Inviting Her Surrogate To Baby Shower 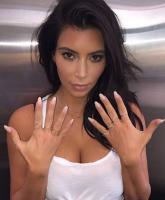 ) is defending her decision not to invite the surrogate to her recent cherry-blossom-filled baby shower.

Kardashian and Kanye West are expecting their third child, a girl, via surrogate.

"I did not," Kim admitted when asked if she had invited the surrogate on 'The Real' on Thursday.

"Of course, I would've wanted her to be there and be a part of it, but I hadn't really gone that far in explaining it to my kids yet. So I have to figure that out first before they really see and then if we're celebrating, you know, her, I just want to celebrate the baby. I think I have to explain it to my kids first and figure out how I'm going to explain it to them."

"I love her," she added. "I have the best relationship with my surrogate. She's so nice. She is the perfect person to do this for my family. She's great. She's been amazing."

The reality star said the surrogate did not know at first that she was carrying the couple's baby.

"You could do it totally anonymously," she explained. "You could go that route and I just felt like I wanted whoever's carrying my baby, like what if they weren't a fan of me or my husband and what if they didn't want to be carrying our baby?"

"I wanted to give them that choice and be like, proud and on the same page. I wanted a relationship with her."

"She was, you know, someone that had watched the show, not like a superfan or anything, that it would have been uncomfortable, but she had seen my struggle and seen how open I was about it. So she was really proud to do it and really excited."

As for why she didn't want to carry the baby herself, Kim said: "I really didn't have a choice. I, at this point, couldn't get pregnant and we wanted to expand our family."

"Anyone that says or thinks it is just the easy way out is just completely wrong. I think it is so much harder to go through it this way, because you are not really in control."