Kim Kardashian: My Daughter 'Would Be Better' President Than Donald Trump 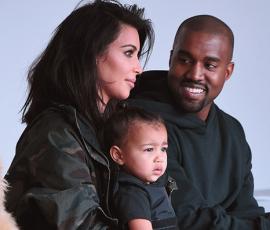 ) is criticizing President Donald Trump in a new interview with Harper's Bazaar Arabia.

"Anyone can run the US better. My daughter would be better," says Kardashian, who has a 4-year-old daughter and 20-month-old son with husband Kanye West.

"We've worked so hard to get where we were and to have so many things that we were so proud of in our country, to just literally revert backwards is the most frustrating thing."

"Every single day when you can't really believe what's going on, the next day it's something else even more crazy and tragic."

Kardashian says she tries to keep her voice out of politics for fear of alienating some of her fans.

"Sometimes I feel like I want to speak out more about political issues," she explains. "You have to be really careful about what you say because a lot of things can be taken in the wrong context and I always want to be respectful, I don't want to hurt anyone's feelings."

Asked if she follows the President on social media, Kardashian admits: "I don't follow him. I follow Obama though."