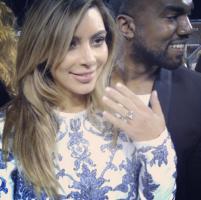 ) and Kanye West are suing over leaked footage of the couple's marriage proposal.

The pair claim Chad Hurley violated a confidentiality agreement by posting a video of the proposal which was meant to only be recorded and broadcast on E!, home to his 'Keeping Up With the Kardashians'.

They say Hurley wasn't invited to the proposal at San Francisco's AT&T Park but was allowed to watch after signing an agreement not to post any video or images from the event.

They are seeking damages from Hurley because "exclusive rights, such as those sold by plaintiffs to publication of video of the event, are particularly valuable. If people violate these rights ... they are of substantially diminished value."

The video showed West at a distance down on one knee proposing to Kardashian as an orchestra plays in the background. The singer proposed to Kardashian on her 33rd birthday. Their first child was born in June.