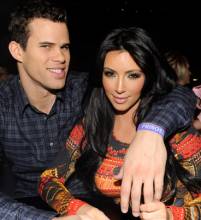 Not that the 30-year-old reality star was expecting it. Kardashian says she was completely taken aback when she found Humphries waiting in her bedroom on bended knee with 'Will you marry me?' written in red rose petals last week.

"I didn't expect this at all... I was in such shock," Kardashian tells 'People' magazine. "I never thought it would happen at home, and I never thought now."

"Kris really didn't want a big celebration, but he had jokingly told my mom he'd be fine if there were mini-horses there. Later that night at the party, my mom brought out two mini-horses, covered in glitter, for us! It was hysterical!"

As for the ring, the NBA player popped the question with a custom-designed, 20.5-carat Lorraine Schwartz diamond ring.

"I just knew I wanted it to be big," Humphries tells the magazine.

No wedding date has yet been announced but if her reality show is any indication, it will certainly be a televised one. Kim's sister Khloe is married to Lamar Odom of the Los Angeles Lakers.