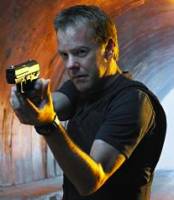 Kiefer Sutherland reveals that he never watched a single episode of '24' because he doesn't like watching himself onscreen.

Kiefer starred in over 200 episodes of the hit Fox series and stars in the upcoming 'Designated Survivor', which sees him as a low-level Cabinet member who becomes President of the United States after a catastrophic attack kills everyone above him in the line of succession.