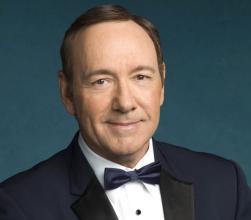 Kevin did his impression of the former president as he joked about Hillary Clinton's election loss and the email scandal.

"I love the Tonys, I do. I love that House of Cards, too," said Spacey. "I love me some good political theater."

"We've had some surprising winners, haven't we? I'm not even talking about the Tony Awards."

"We've had some exciting young performers this year," he said referencing Broadway rising star Ben Platt. "Ben you know who you bumped off that list? My wife!"

"Between you and me, you might be a better singer, but Hillary is much better at creating fake email accounts than you."

"I'm gonna be in trouble when I get home."

Spacey was joined by the Radio City Rockettes for an opening number with several guests including Billy Crystal, Whoopi Goldberg and Stephen Colbert.