Kevin Bacon To Star In Amazon Series 'I Love Dick' 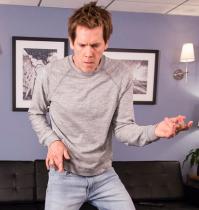 Kevin Bacon is set to star in Amazon series 'I Am Dick'.

Bacon is in final negotiations to star in a pilot for the series as Dick, a charismatic Texas professor who becomes the object of a married couple's obsession.

The comedy will tell the story with the points-of-view shift between characters to document "the unraveling of a marriage, the awakening of an artist and the reluctant deification of a man named Dick."

Kathryn Hahn will star as the married woman while her on-screen husband is yet to be cast.

It would be Bacon's first TV series since Fox's 'The Following'.