Kesha: 'I Was A Little Hug Traumatized' After Jerry Seinfeld Denied Hug 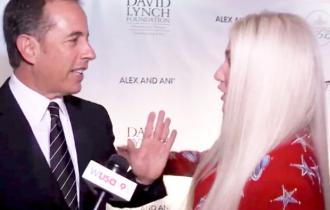 ) is talking about being denied a hug by Jerry Seinfeld on the red carpet last month.

"I felt like I was 5 years old. I instantly was like, 'Oh, f--k me.' And I like somehow ended up in my very own mini episode of Seinfeld for like five minutes," the singer tells SiriusXM’s Hits 1.

"I should have known better. That was my fault."

The comedian rejected her attempts to hug him three times while he was conducting an interview at The David Lynch Foundation's National Night of Laughter and Song.

Kesha says she got caught up in the moment after seeing Jerry Seinfeld because she was such a huge fan of 'Seinfeld'.

"I've seen every episode a thousand times. I used to carry the whole season packaged with me everywhere, like on my carry-on. Like, DVDs!"

"That's why I was trying to attack him, that's why I wanted a hug so hard. But anyways. He's not a huggy guy. That's fine."

"I had just gotten hug-denied. I was a little hug-traumatized," she laughs.