Kelly Ripa Jokes In Return: 'Our Long National Nightmare Is Over' 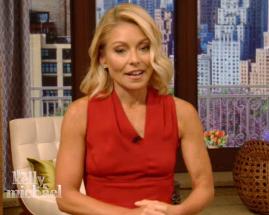 ), who had been absent from 'Live with Kelly and Michael' for almost a week, returned to the show on Tuesday and candidly spoke about the events that transpired.

"Our long national nightmare is over," she joked standing alone dressed in red at the beginning of the show. "My dad, who was a bus driver for 30 years, thinks we're all crazy."

"I needed a couple of days to gather my thoughts. After 26 years with this company, I earned the right," Ripa said.

"And let's be honest, I know half of you called in sick to be here, so we get each other," she joked to the studio audience.

Ripa confirmed ABC executives apologized to her for the lack of communication and keeping her in the dark about her co-host Michael Strahan's departure.

She said they assured her that "there is a commitment to this show, to the people who work here; and most importantly, to you, the viewers."

"Our parent company has assured me that 'Live' is a priority."

Ripa said the dispute started a "much greater conversation about communication and consideration and, most importantly, respect in the workplace."

Notably, 'GMA's Robin Roberts and George Stephanopoulos were kept in the loop. However, Ripa was furious she was kept in the dark.

She congratulated Strahan for his new full-time role on 'Good Morning America' and said she was "thrilled" for him.