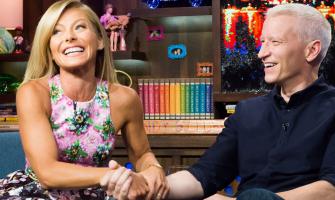 ) says a recent botox episode left her unable to smile for months.

"I'm going to tell you a story I've never told anyone," said the host of 'Live with Kelly' to guest co-host Megyn Kelly. "I got bad Botox about... what was it, a year ago? And it was bad."

"It did something to my good side, so then I had two bad sides," laughed the 46-year-old. "I'm not kidding!"

Ripa, who has never kept her botox use a secret, said: "I'm starting to look myself again but there was about a six-month period where people were like, 'What's wrong with Kelly? She doesn't smile anymore.' And I was like, 'I AM smiling!'"

Last year Kelly said she got botox on her forehead to appear less angry.

"I got Botox here because people kept saying 'Are you OK' and I'm like 'I'm fine why?' 'You look like you're angry.' I was like, 'Then it's time to get Botox.'" she said on the talk show.