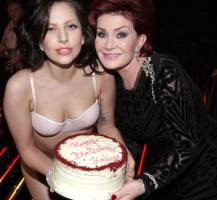 ) for wishing her Happy Birthday with a cake during an appearance on the UK edition of 'The X Factor'.

Gaga presented judge Sharon Osbourne with a cake to celebrate her daughter's 29th birthday, which fell on the day of the appearance. But apparently Osbourne wasn't impressed by the gesture.

"Not to be ungrateful but why would you send me a birthday cake via my MOTHER in a country half the world away?," Kelly wrote on Twitter with the hashtags #JustSendItToME and #LoveNotWar.

She followed that up with a photo of the cake with the hashtags #EatMySh-t and #Hypocrisy.

"I didn't know it was your B-day until this afternoon," Gaga responded. "Meant as a peace offering. Happy Birthday."

She then told her fans to lay off Kelly: "Monsters, please just focus on the positive of tonight's performance and do not send any hateful messages. I don't support it."

The two have been bitter enemies since Osbourne called Gaga a "butterface" in 2009 -- not expecting the onslaught from Gaga's loyal fans.

"They've said I should kill myself, that they hoped I get raped. I mean it's crazy but I've had this all my life and I just try and ignore it," Osbourne explained in an interview. She blamed Gaga for the messages.

"Don't say, 'When you see bullying, intervene,' while letting your fans send me death threats. If my fans did that, I would not stand for it. You can say whatever you want with your millions of monsters. I know the truth."

After being called a "butterface," Gaga told Osbourne her work on the Fashion Police" was rooted in criticism, judgment, and rating people's beauty against one another."