Kelly Osbourne: I Was Never As Fat As Christina Aguilera Is Now 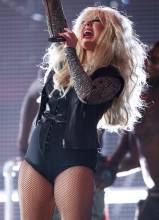 ) for her recent weight gain because she says the singer did the same to her.

"She called me fat for years," Osbourne said on Friday's episode of 'E!'s Fashion Police'. "I was never that fat."

Osbourne and the rest of the crew were analyzing Aguilera's look at last weekend's Michael Jackson Tribute Concert in which she wore a pantless ensemble with fishnet tights.

"She called me fat for so many f--king years," Osbourne continued, "so you know what? F--k you! You're fat too."

When George Kotsiopoulos agreed it was "a crappy outfit no matter what shape your body is in" and said she was "still probably a size 2/4," Osbourne said there was no way.

Joan Rivers also had her own zinger ready to go: "Lady Marmalade got into the peanut butter again."

Osbourne was constantly battling weight issues until her 2009 stint on 'Dancing with the Stars', which helped her shed nearly 50 pounds.