Keith Urban To Return For Next Season Of 'American Idol' 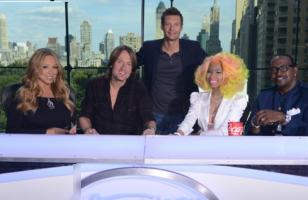 Keith Urban, who had openly expressed interest about returning to 'American Idol' after his first season as judge, will be back.

"He did a great job on the show, fans loved him and you can see how much he loved the doing the show," Fox Entertainment Chairman Kevin Reilly said at the Television Critics Association panel Thursday.

"Thrilled to be back on American Idol with my pal Ryan Seacrest and dying to know who the other judges will be!," Urban, who wasn't at the panel, said on Twitter soon after.

Urban is the only judge returning from last season after the departures of Randy Jackson, Mariah Carey (photos

Reilly, however, did provide some hints about who will fill the rest of the seats.

) about a possible return and other names under consideration include Jennifer Hudson, Will.i.am and producer Dr. Luke.

Reilly said he wanted people who are "good at the job" and "who people like." Although he hoped the show could "refocus on the contestants."

Season 13 of 'American Idol' will premiere in January 2014 but auditions are set to begin soon so expect the judging table to be set before then.