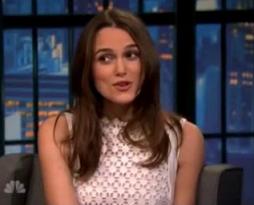 ) talks about meeting Benedict Cumberbatch's crazed fans, also known as Cumberbitches, before revealing that she's terrified of her mother after she found 'Breaking Bad' funny.

"What's extraordinary is that she still stands by," Knightley says. "I only saw three episodes and I've only seen three episodes because I thought it was going to be a comedy and it was so dark and I got so freaked out that she found it funny that I was just... I can't deal with this at all."

"And she said 'You know, it's hilarious. He's dying and there's the body and bath and they melt it with acid. It's just hilarious.'"

"It was the first time I realized that she was a psycho," said the actress.

Host Seth Meyers then tried to close with "she seemed lovely, by the way, I should say."

"Yeah, but they all seem lovely. Don't they?," replied Knightley. "Psychopaths."

"Now that you mention it, she seemed a little TOO lovely," laughed Meyers. "Now I'm nervous that she's back there."