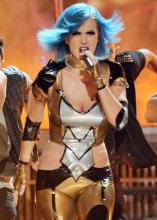 ) can add another star to her career with the announcement that she will perform at the Super Bowl halftime show in February.

The NFL has confirmed that Perry, who has had No. 1 hits on the Billboard Hot 100 chart since her debut, will perform at Super Bowl XLIX.

The halftime show is one of the most-watched musical events all year. Last year, it was seen by more than 115 million viewers in the country.

The selection once again affirms the NFL's push to attract the younger demographic with Bruno Mars, Madonna, Beyonce in recent years.

Perry also did a video with Pepsi, the halftime sponsor, titled "Hyped for Halftime."