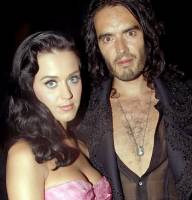 Russell Brand has been reportedly deported from Japan for incidents stemming from over a decade ago.

"So my husband just got deported from Japan. I am so sad," said Perry on Twitter.

"I brought him all this way to show him my favorite place."

She blamed the deportation on "priors from over 10 years ago."

The 26-year-old singer urged fans to make Japanese authorities "free" Brand but after that didn't amount to much, Perry resigned to the pesky rules known an law.

"But of course, my Japanese fans, the show must go on no matter the daily aftershocks or husband kidnappings!"

For his part, Brand joked about the situation with 'prisoner' messages while he was being held by authorities.

"Planning escape from Japanese custody," he said. "It's bloody hard to dig a tunnel with a chopstick."