Katy Perry: Russell Brand Wanted Me To Have Children For 'Control' 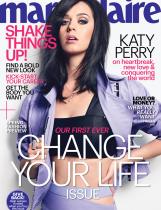 ) says ex-husband Russell Brand wanted to have children but she's glad she didn't give in.

"He really wanted me to have children, and I knew I wasn't ready," Perry tells 'Marie Claire'.

Perry says she's still not at that point in her life: "I'm definitely not there yet, and I can't plan that far in advance. When I decide to have a family, I'll just want to be mom for a little bit."

And, as has become customary in recent interviews, the singer continues to gush about her relationship with John Mayer.

"He's just a fantastic partner," she explains. "I've been a fan of his for such a long time. He's got a brilliant, brilliant mind. It's a rad, mature relationship."

Perry also clears up that her divorce was a factor in her temporary split from Mayer earlier this year.

"I took a break from my boyfriend, not one that I wanted. It was like a splash of cold water to search inward on what was going on with me. That is what led me to this new awakening, this realizing, 'If I don't do some self-love, I'm not going to be able to keep the love that I want.'"

"I still needed to deal with all of my ex-husband stuff. I hadn't," she adds. "It's almost like if I kept talking about it, it would seem like I actually cared about it. I don't."