Katy Perry On Russell Brand Divorce: 'It's Like I Got Punched In The Face' 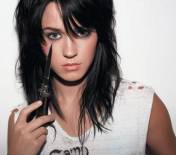 ) says after 'Teenage Dream' she almost called her new album 'Adult Reality' because of her divorce from Russell Brand.

The 28-year-old singer and Brand split in December of 2011 and finalized their divorce in 2012.

Perry tells 'The Sunday Times' she was in "bed for about two weeks" after the surprise divorce.

"I'm not the kind of person that is always, like, 'What doesn't kill you makes you stronger,'" she explains. "I was pretty f---ed, yes. It hurt a lot. I got a good knock."

"What I wanted to call this record at first was Adult Reality, because Teenage Dream was me so high on that cotton-candy cloud, and then it's like I got punched in the face and kicked down the stairs a couple of times."

"So I had to face the reality that things are not always on cloud nine."

But Perry says her divorce showed her that "my self-worth was in someone else's hands, which is never a good idea, because it can be taken from you at any time. And it was, it was shattered."

"But I don't do that anymore," she says.

In a recent interview, Perry hinted there was more to the divorce but said she was saving the "real truth" for a "rainy day."

These days, of course, the pop star is dating John Mayer, who she's called a "genius."