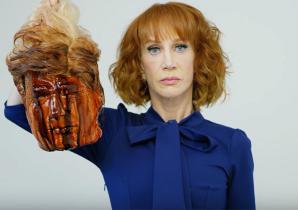 Kathy Griffin is acknowledging that she "crossed the line" by posing for a photo with a bloodied replica of President Donald Trump's head in her hand.

This after the comedian received backlash from all corners of the political spectrum for a photo of her seemingly holding Trump's decapitated head.

Donald Trump Jr. called the beheading photo "disgusting" before using it as an attack: "Disgusting but not surprising. This is the left today. They consider this acceptable. Imagine a conservative did this to Obama as POTUS? Will CNN keep putting her on air for things like the New Years celebration?"

"For the record, I am appalled by the photo shoot Kathy Griffin took part in," he said. "It is clearly disgusting and completely inappropriate."

Even Chelsea Clinton denounced the photo: "This is vile and wrong. It is never funny to joke about killing a president."

Griffin said she was deleting the photo and was going to ask photographer Tyler Shields to follow suit.

"Kathy Griffin should be ashamed of herself," Trump said on Twitter. "My children, especially my 11 year old son, Barron, are having a hard time with this. Sick."