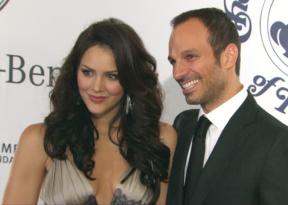 ) wants it known that she split from her husband "months ago" after being caught kissing married 'Smash' director Michael Morris.

This after the pair were caught kissing in a Los Angeles parking lot.

But while McPhee may have separated from her producer husband, Nick Cokas (pictured), months ago, Morris' wife of ten years, Mary McCormack, has apparently kicked him out of their home after the photos surfaced.

Morris wanted to keep the affair under radar and the New York Post reports he even tried to buy the photos himself after he discovered the two had been photographed and the photos were being shopped around.

Ironically, he recently directed an episode of the ABC drama 'Betrayal'.

For McPhee's part, a friend of the singer tells Us Weekly: "She is SO embarrassed she was caught. She should have known better!"