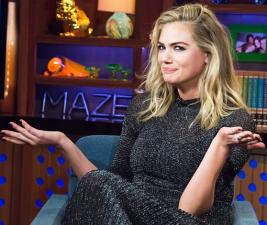 ) said in a conversation on 'Watch What Happens Live' with Andy Cohen that she has some rules for her MLB pitcher fiance Justin Verlander.

"There's no sex before a game — absolutely none," Upton told a caller who inquired whether the Sports Illustrated Swimsuit Issue covergirl ever got intimate before a game.

"What I've just found out is, if he plays too well, there's no sex after, either," she added. "He's exhausted. It's kind of a buzzkill for me."

Ricky Martin, who was also a guest, joked Upton should: "Just kill him a little bit further."

Upton and Justin Verlander became engaged last May. After he was passed over for the Cy Young Award despite having the most first-place votes, Upton stood up for her man.

"Hey MLB I thought I was the only person allowed to f**k Justin Verlander,?!" she told Major League Baseball. "What two writers didn't have him on their ballot?"

"He had the majority of 1st place votes and two writers didn't have him on their ballots?!! Can you pick more out of touch people to vote?"