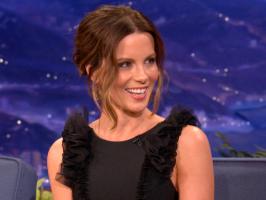 ) and her daughter are both of the opinion that there are few things funnier than a naked guy so whenever there's a low moment, the British actress decides to share their go-to photo of Michael Sheen naked in the shower.

"My daughter and I are both from the school where we think the naked man is very funny in the right circumstances," says Beckinsale.

"Not as a sudden surprise jumping out at you in a dark alley but it's a funny thing. It's funny!"

"There is a funny picture of him in a very good show that he did in which he was brilliant but they have a still of him sort of getting out of the bathtub naked -- with a quite military face and stance."

"That's just funny so sometimes in a low moment she'll text me that picture or I'll text it to her."

"If I sense that she's feeling low, I think 'You know what? She could use Mike in the bath.' It works very well most times."