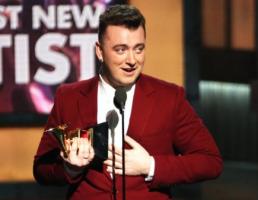 Kanye West is apparently looking to turn over a new leaf and apologizing on social media.

The 37-year-old singer sent a public apology to the Grammy winner on Twitter Thursday for stepping on to the stage during his acceptance speech and later saying the artist didn't deserve to win over Beyonce.

"I would like to publicly apologize to Beck, I'm sorry Beck," West wrote.

"I also want to publicly apologize to Bruno Mars, I used to hate on him but I really respect what he does as an artist."

"I also would love for Bruno to sing this hook on this song 88 Keys / Puff and I produced," he added. "I even asked Tyler to shoot the video."

Mars' fans will remember when West ranted onstage at a 2013 concert that the artist was overrated and just the "prettiest."