Kanye West Rambles At MTV VMAs, Compares Himself To Jobs, Disney and Ford 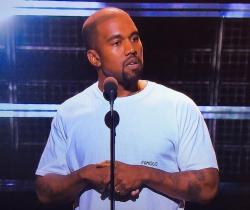 ) as "thought leaders" in a rambling speech that included a defense of his 'Famous' video, rift with Taylor Swift (photos

) and even covered violence.

West said his 'Famous' music video was "an expression of our fame right now... the audacity to put Anna Wintour next to Donald Trump... I put Ray J in it, bro. I see you, Amber Rose."

"So I was speaking at the Art Institute last year and one kid came up to me, and he said, 'Three of my friends died and I don't know if I'll be the next.' You know like when you're a senior and it's the last month and you just don't feel like doing any more work. If you feel like you're see people dying next to you, you might feel like what's the point."

"My role models are artists, merchants, there's less than 10 that I can name in history: Truman, Ford, Hughes, Disney, Jobs, West. Tonight we're here to have fun... We are undeniably the influence -- the thought leaders."