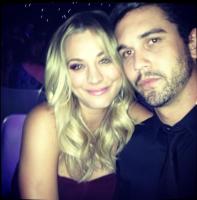 ) has filed for divorce from husband Ryan Sweeting after 21 months of marriage.

According to the filing, the couple's separated earlier this month on September 3.

Cuoco, 29, and Sweeting, 28, also had a prenuptial agreement with both spousal support and property assets agreed in the document.

The 'Big Bang Theory' actress, who had been raving about their relationship while she was still head over heels in love, gave fans an indication something was amiss when she deleted nearly all photos of Sweeting from her social media accounts.

Kaley, who had taken her husband's last name, is also requesting her name go back to Kaley Christine Cuoco. She married the tennis player on December 31, 2013.