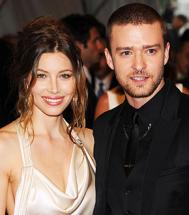 ), has given birth to the couple's first child, Silas Randall Timberlake.

Timberlake confirmed the couple was expecting back in late January, after months of staying mum.

"Thank you EVERYONE for the Bday wishes! This year, I'm getting the GREATEST GIFT EVER. CAN'T WAIT," he wrote at the time with a picture of him kissing his wife's belly.

Timberlake and Biel haven't released a statement but are said to be "ecstatic." They've been married since 2012.