Justin Bieber Banned From China Because of His 'Bad Behavior' 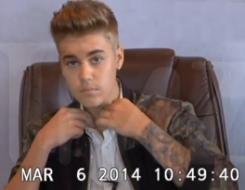 Justin Bieber has been banned from performing in China because of his "bad behavior" on and off the stage.

In a statement posted on its website this week, Beijing's Municipal Bureau of Culture explained that the artist, who has had repeated run-ins with the law, isn't welcome on the mainland.

"Justin Bieber is a gifted singer, but he is also a controversial young foreign singer," said the bureau in repsonse to a fan's question about Bieber's absence from China.

The fan wondered why Bieber wasn't coming to China as part of his Asia tour, which takes him to Tokyo, Hong Kong the Philippines and Singapore, in September.

"As far as we are concerned, he has engaged in a series of bad behaviours, both in his social life and during a previous performance in China, which caused discontent among the public."

It said the ban was necessary to "purify" the country's entertainment industry but suggested it was not permanent.

The singer last performed in China as part of his Believe tour in 2013. His trip also included a photo of being carried up to the Great Wall of China by Chinese bodyguards, which was viewed as offensive by some in the country.