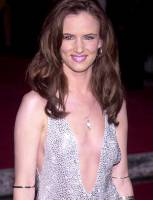 Juliette Lewis was briefly hospitalized after her car was struck by a hit-and-run driver in Burbank, California.

Lewis was a passenger in the back seat when a driver ran a stoplight, smashed into Lewis' vehicle and kept going. The car was found a few blocks away, but the driver had fled the scene.

"The sedan Juliette was traveling in was completely totaled," explains her publicist. "Ms. Lewis … is a bit banged up and sore but otherwise thankfully okay. She is now resting at home."

Lewis complained of pain in her head, back and neck and some bruising. However, after a trip to the hospital for evaluation, her injuries were not deemed to be serious.

"That vehicle took off," says Burbank Police Department spokesman Sgt. Robert Quesada. "It has since been impounded, and they're trying to track down the registered owner and then determine who was behind the wheel."

The 37-year-old actress was on her way home from an event for her new movie 'Conviction' at the time of the accident.