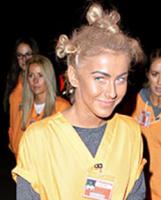 ) is apologizing after showing up at a Beverly Hills Halloween party Friday in blackface.

The actress and 'Dancing with the Stars' pro says she her dark makeup and prison jumpsuit was meant to portray the character Crazy Eyes from 'Orange Is the New Black'.

But Hough says she didn't realize that her "costume" would be offensive to some.

"I am a huge fan of the show Orange is the New Black, actress Uzo Aduba, and the character she has created," she wrote on Twitter after being slammed.

"It certainly was never my intention to be disrespectful or demeaning to anyone in any way. I realize my costume hurt and offended people and I truly apologize."

Although one wonders how big a fan of the character Hough really is considering Aduba's character and other inmates wore khaki colored jumpsuits in jail, not orange.