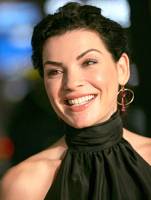 Julianna Margulies is no fan of head to head television rating battles when it comes to women.

Speaking about the perceived ratings battle between her show, 'The Good Wife' and 'Body of Proof', starring Dana Delaney, Margulies says she has no idea why network executives want put one show starring a woman against another.

"I don't understand executives that pit women against each other, the fact that they brought in 'Body of Proof,' Dana Delaney is a friend of mine, and the two of us were just rolling our eyes, it's like, of course, you finally have two great female leads and you're going to put us on against each other."

"You're assholes. You should have put them on against a different show to see where they go, and then in the end, it was split down the middle. It's the feeling that you want to celebrate not de-calibrate."

And Margulies is pleased that 'The Good Wife' has been moved by CBS to Sundays at 9 PM for next season.

"I'm thrilled. At first I was taken aback because you always think a move is a bad sign. And then I started thinking about it -- this was all in the span of like five minutes -- and I was like wait, that was 'The Sopranos' spot. That's like my favorite time to watch television."

"Hold on a minute, this opens a whole door to the kinds of people that we want to attract to our show: a younger audience and an older audience. What it also does is, you can't really categorize our show. We're not a procedural, we're not a serial, we're a legal, political, human show, and any given week can be something else, and I think it allows us not to be pigeonholed."