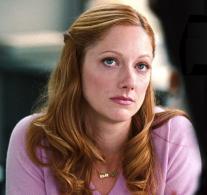 "He's a big fan of the original and has been a fan his whole life. When we got married, we had some nods to the franchise," says Greer.

"We had the movie's playing, we had a cake topper -- which was a bride and groom chimp -- and I bought him a vintage Rolex."

"I know, I really like him!," Greer quipped when crowd reacted.

"I bought him a nice watch and engraved on the back 'Ape shall not kill ape.'"

"He was very moved and love it very much. Like you would. Anyone would. Then a few months after our wedding, he told me that I got the quote wrong and it's 'Ape shall never kill ape.'"

But Greer says that piece of knowledge came in handy when she had to correct 'Dawn' director Matt Reeves, who almost made the same mistake.