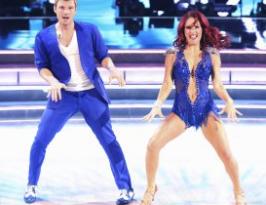 A judge has rejected the Bindi Irwin's 'Dancing with the Stars' contract because he wants proof that her famous father, Steve Irwin, is really dead.

ABC requires court approval for Bindi's contract since the 17-year-old is a minor.

Her mother, Terri, has signed a document relinquishing all rights to earnings on the show. But the judge has demanded the same document from Bindi's father.

"The court is unable to find that it is in the best interest of the minor to be bound by the terms of the contract" without the document from Steve, the judge says.

The 'Crocodile Hunter' tragically died at the age of 44 after a stingray attacked him in September 2006.

Bindi has already earned an estimated $230,000 by making it through to Week 9. She will reportedly take home $50,000 a week for the final two weeks if she can make it to the end.

It sounds like the judge isn't aware Steve Irwin is dead. However, it's unclear whether the family can just submit a death certificate.