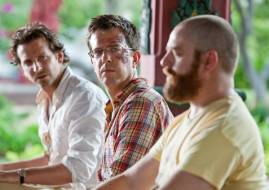 A St. Louis judge has cleared the release of 'The Hangover: Part II', dismissing a tattoo artist's request for an injunction over the use of Mike Tyson's distinctive face art on Ed Helms' face.

S. Victor Whitmill, who gave the former heavyweight champ his facial tattoo, sued Warner Bros. because he held the copyright for the tattoo.

He was seeking an injunction and damages for copyright infringement. But after the studio testified that issuing an injunction against the film's release would simply do too much damage, the judge denied the request.

But despite the setback, maybe more importantly for Whitmill, US District Court Judge Catherine D. Perry admitted Whitmill had a strong case and allowed it to move forward.

"While we are disappointed that the motion was denied, we are quite pleased by Judge Perry's findings that Mr. Whitmill proved a 'strong likelihood of success' on the merits and that most of Warner Bros. defenses were 'just silly'," says Whitmill's attorney Geoffrey Gerber.

"Judge Perry recognized copyright law protects tattoos and that Warner Bros. had no permission to use Mr. Whitmill's artwork in the movie. We look forward to further vindicating our client's rights at trial in the near future, including a permanent injunction preventing further distribution of the movie."

"In her decision, the judge expressed concern about the potential harm that could be suffered by all of the theater operators if the movie could not open this weekend. We certainly understand. These are innocent third parties put in this position by Warner Bros."