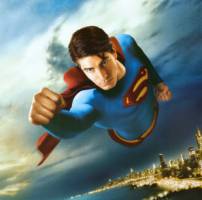 Jude Law tells Stephen Colbert why he turned down the role of Superman in the DC comics movies that were directed by Bryan Singer.

The role eventually went to Brandon Routh but not before Law tried the costume.

Law says after Singer insisted he tried the costume, he finally relented. But after taking one look at himself in the bathroom mirror he decided he didn't want photos of himself in the tight fitting costume in movie posters all over the world.