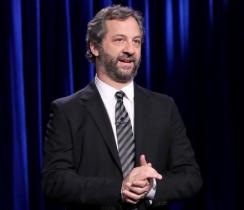 In an appearance on the 'Late Show' to promote his book and stand-up gig, Judd Apatow reveals that he's been saying his wife name wrong for 18 years.

"You know, the other day out of the blue she said to me 'Oh, by the way, my name isn't Lez-lie, it's Less-lie,'" recalls Apatow.

"And she said 'I thought you probably wouldn't be able to make the adjustment and I didn't want to be mad at you.'"