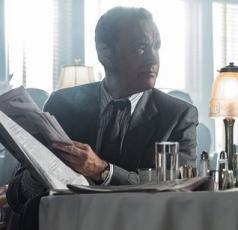 The first extended trailer for Steven Spielberg's 'The Post' has been released, starring Meryl Streep and Tom Hanks.

The drama is about the unlikely partnership between The Washington Post's Katharine Graham (Streep), the first female publisher of a major American newspaper, and editor Ben Bradlee (Hanks), as they race to catch up with The New York Times to expose a massive cover-up of government secrets that spanned three decades and four US Presidents.