Jose Canseco Undergoes Surgery After Shooting Himself In The Hand 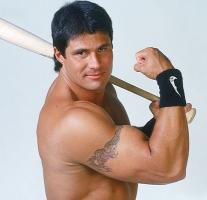 Jose Canseco accidentally shot himself in the hand while cleaning his handgun at his Las Vegas home on Tuesday.

"It was a serious hand injury," Las Vegas Metro Police Lt. Mark Reddon tells NBC News. "There was nothing suspicious. There was no alcohol involved, just a misstep with a handgun."

"I heard the gun go off and saw his middle finger hanging by a string," fiancée Leila Knight tells the Los Angeles Times. “It will either have to be amputated or have full reconstruction surgery."

Knight says doctors have told the former MLB star, who had 462 career home runs and a six-time All-Star, that he'll never have full use of that hand again.