Jonah Hill Explains How Channing Tatum Tortures Him On Set 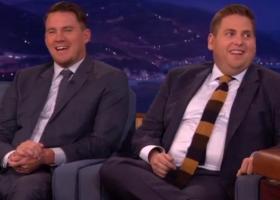 Jonah Hill explains what Channing Tatum did to annoy him between takes on set while filming '22 Jump Street'.

"It just is like the worst. I guess there's some area above your knee and before your thigh starts that just feels like a billion knives are crashing into you at the same time," Hill tells Conan O'Brien after Tatum demonstrates.

"And whenever he's bored. He squeezes this."

After Tatum does the same thing to do Andy Richter, the co-host tries to return the favor but it has no effect on Tatum.

"When I was a kid whose dad used to do that and everyone hated him!," said Richter.

"That sounds very illegal," quipped Hill. "I don't know if you want to talk."

After Conan tried to prod further asking if anything gets Tatum to stop and if Hill really hated it, the actor burst out: "Why the f--k would I like something like that?! What are you talking about? Of course I don't like it!"