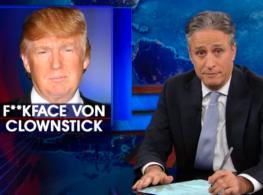 Jon Stewart may no longer be the host of 'The Daily Show' but he's weighing in with a new dig at Donald Trump.

At the taping of a chat with President Barack Obama's former aide, David Axelrod, at the University of Chicago, the comedian tore into the presumptive Republican nominee and said he wasn't sure it was constitutional for a "man-baby" to become president.

"Are you eligible to run if you’re a man-baby, or a baby-man?," Stewart quipped. "I don’t know if they're referred to as man-baby Americans. He is a man-baby. He has the physical countenance of a man and a baby's temperament and hands."

"Vanity Fair editor Graydon Carter did a joke about Donald Trump's hands 25 years ago, he's still not f---ing over it."

Stewart said if Trump really wanted a political debate, he should tell voters" "The problems in this country are not because of Mexicans and Muslims."

He also blamed Trump's rise in part on the failure of Democrats in part.

"The door is open to an a--hole like Donald Trump because the Democrats haven't done enough to show people that government, that can be effective for people, can be efficient for people," he said. "And if you can't do that, then you've lost the right to make that change and someone's going to come in and demagogue you."

He then turned to Trump's likely opponent Democrat Hillary Clinton as "a very bright woman without the courage of her convictions."

"That's not to say that she is not preferable to Donald Trump," he added, "because at this point I would vote for Mr. T over Donald Trump."