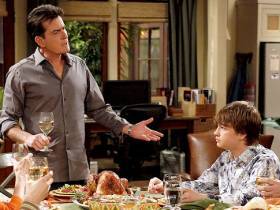 On the SAG Awards red carpet, Jon Cryer finally let loose and joked about what it was like working with Charlie Sheen on 'Two and Half Men'.

"He's great. He's a clown," Cryer began about what it was like working with Ashton Kutcher instead of Sheen on the set of the CBS sitcom.

"He is up for anything, willing to do anything. He's got a great, great spirit."

"It's a little less suspenseful being on the set now a days," Cryer, who lost Lead Actor in a Comedy Series to Alec Baldwin, said with a grin.

"When you come into work, you are pretty sure he's going to be there... and nobody's pushed his car off a cliff or anything like that."