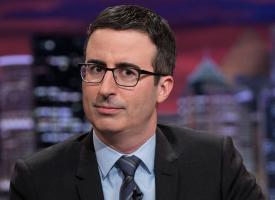 A little tired of the traditional superhero movies, John Oliver pitches a comic book adaptation about the perilous adventures of superhero Johnny Strong.

"He's a mild-mannered fifth-grader named John Olivier. No relation," he jokes. "But from the time school lets out until dinner, he becomes the, let's say, unconventionally handsome hero, Johnny Strong."

"Johnny Strong is a kick-ass hero with a bad attitude. He's seen a boob and he knows the F-word is."