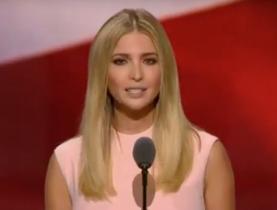 With Ivanka Trump and Jared Kushner holding an incredible amount of political power, John Oliver takes a look at the power couple in the White House.

Oliver says Ivanka doesn't have the influence over father Donald Trump she would like others to think she does.

"She's been trained in the art of Trump branding," he says. "To be as vague and as likeable as possible so everyone can plausibly think she shares their values whether or not that's actually true. If that sounds like a harsh thing to say about her, she basically shared that message in one of her books."

"She's pretty much telling you to your face not to trust any assumption you're making about her."

"So it is possible she's doing nothing to moderate her father. The truth is we may all be thinking Ivanka is doing a lot more than she actually is."

"The apple doesn't fall far from the orange," he quipped.